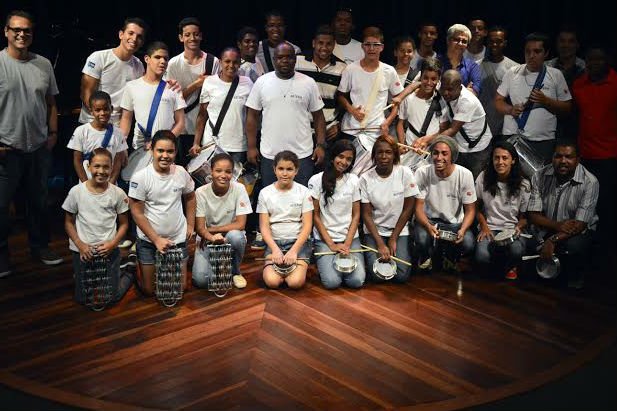 The launch of the book “Percussion in Samba Schools”, by the conductor and composer Leandro Braga, boasted the participation of 20 members of Bateria do Instituto TIM, who showed how a group of this kind works in practice. The youths attended the event – on the evening of March 27th at the Artur da Távola Municipal Reference Centre for Rio de Janeiro Music, in Rio de Janeiro – and separately played the typical instruments of a samba school. They also performed together a repertoire of traditional percussion from Rio and other Brazilian rhythms.

Leandro has followed Bateria do Instituto TIM since the beginning of the project. “It’s a unique percussion band because it brings together people with and without special needs through samba school skills,” he says. For him, the youths’ performance at the book launch is a way of bringing notoriety to both art forms. “They’re doing a great job. Appreciation of percussion has been increasingly growing and the musical upshot is very rich,” he explains.

According to the conductor, there are no percussion bands in Rio de Janeiro like Bateria do Instituto TIM – which seeks to bring together young people with and without special needs, and is comprised of a majority of youths with hearing impairment. “To participate in musical activities in a group validates physical qualities and contributes to the social evolution of these young people. This is why many people who undergo treatment and have special needs enjoy music lessons,” he pointed out.

At the launch of the book – which explains in detail how percussion bands work, which instruments are used and what the gestures and commands mean – participants gave practical support to the explanations of Bateria do Instituto TIM conductor, Mestre Mangueirinha, who spoke about the instruments. Mangueirinha was invited by Leandro Braga to be a technical consultant on the book. “I’ve always followed the work of Mangueirinha and, without a doubt, I invited him to participate in the book so he could tell us more about this universe from within it,” says Leandro.