The AWC 2016 Workshop I begins 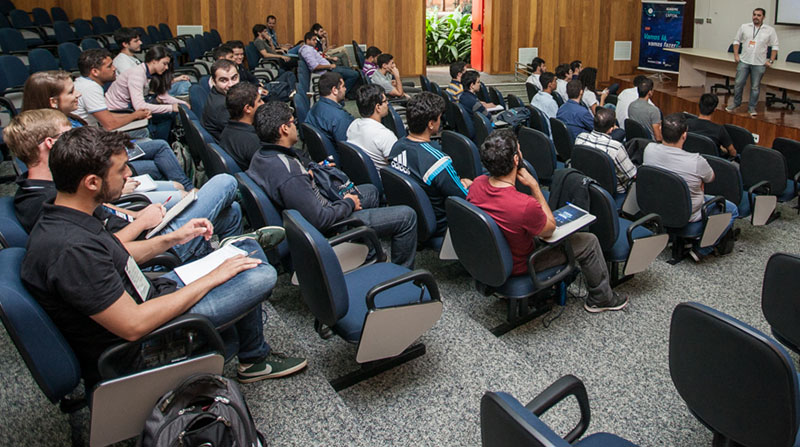 Academic Working Capital’s 2016 Workshop I opened on January 18 in São Paulo (SP). In the second year of the program – an initiative by Instituto TIM that helps undergraduates turn their senior research projects into innovative products and business –, the students will be attending three on-site workshops and be monitored remotely by AWC monitors. The first workshop is taking place on January 18 to 20 in the Mechanical and Naval Engineering building of the Polytechnic School at Universidade de São Paulo (USP). Thirty-four students of the 15 projects selected in the first phase will be participating.

At the event’s opening ceremony, Poli-USP Professor Thiago Martins, who is in charge of the senior research project course, explained that USP is seen as a very academic, research-oriented school but that they plan to change that reality and invest more in projects and entrepreneurship. Later on, the students attended lectures given by the Tech Muda and Loot Factory groups, which had participated in AWC 2015. They talked about their projects and the lessons they learned the year before.

“The more you get to speed up this process of failing the better. The best time to do that is in an undergraduate program,” explained Diogo Dutra, AWC content coordinator. He presented the program to the students and explained AWC shows participants a new career prospect – as entrepreneurs. “It is a major challenge. As the guys said, you are going to go through several stages and discussions, but the process is exactly like that,” Diogo added.

The purpose is for the 15 groups to have developed a consistent business model and defined plans to make their first MVP (Minimum Viable Product) by the end of Workshop I. To do that, they are going to learn about customer development, obsession for the user, interactive development, and business analysis, among other topics.

The first day was dedicated to business development and started with the panel “What is it like to run a startup?” Diogo talked about a few myths that must be crushed: for instance, that having a startup means having fun, status, and loads of cash. Along with Miguel Chaves, a partner at innovation and design consulting firm CAOS Focado, he told the story of Renato Freitas, one of the founders of 99taxis, to say one’s first business does not need to be a smash – Renato’s first startup was university network Ebah. “We are not going to throw ideas away just because the market isn’t huge. Many acceleration programs will go for that right away. Not here.”

After the panel, the groups participated in their first Product Review Fair. Using posters, they outlined the plans for their projects and presented them to fellow students, specialists, and guests. It was their first chance to get feedback on their products and share experiences.

The groups were split into four clusters, according to each project’s particularities: heavy machinery, soft apps, autonomous modules, and tech products. In the clusters, they kept on discussing their products. Additionally, they learned about the Business Model Canvas and put one together for their projects, besides organizing a tree of problems.

The activities continue on the second day of Workshop I, which will be dedicated to getting feedback from users. 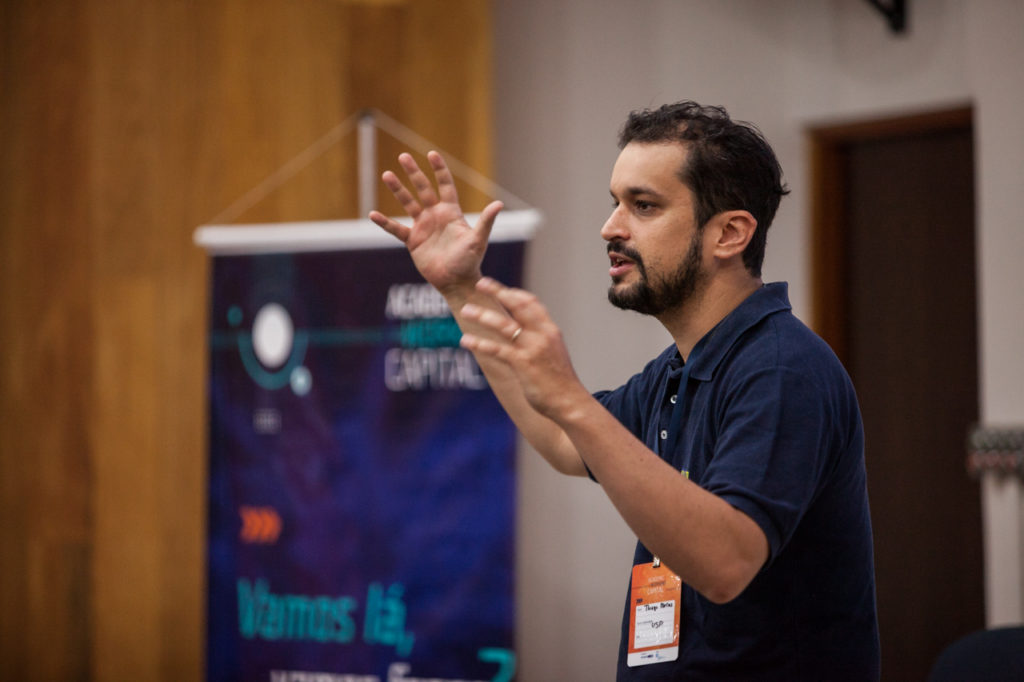 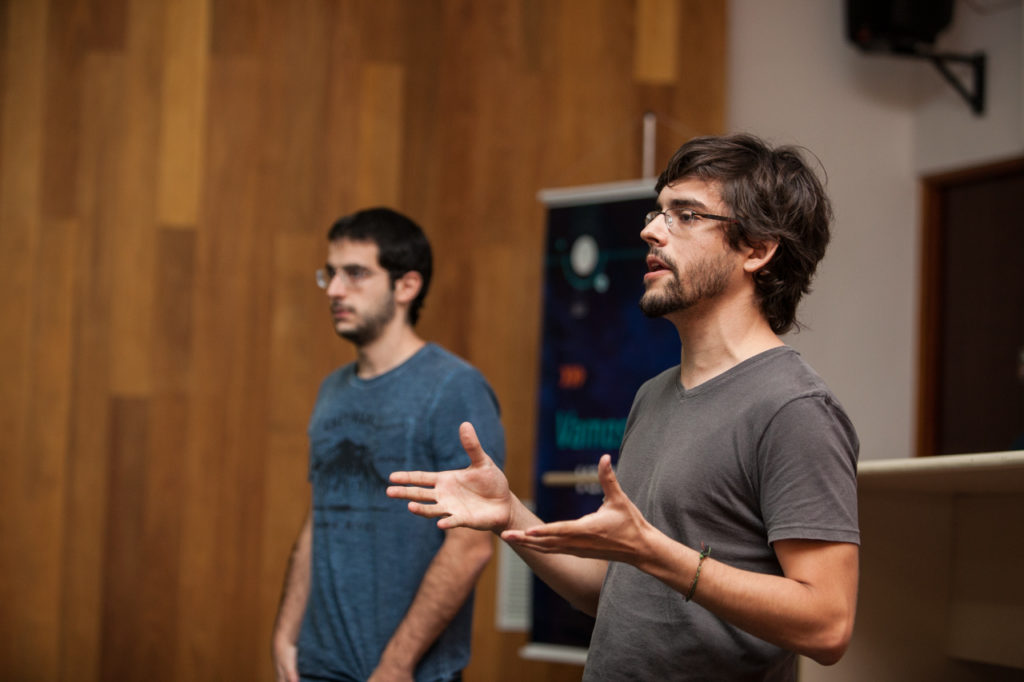 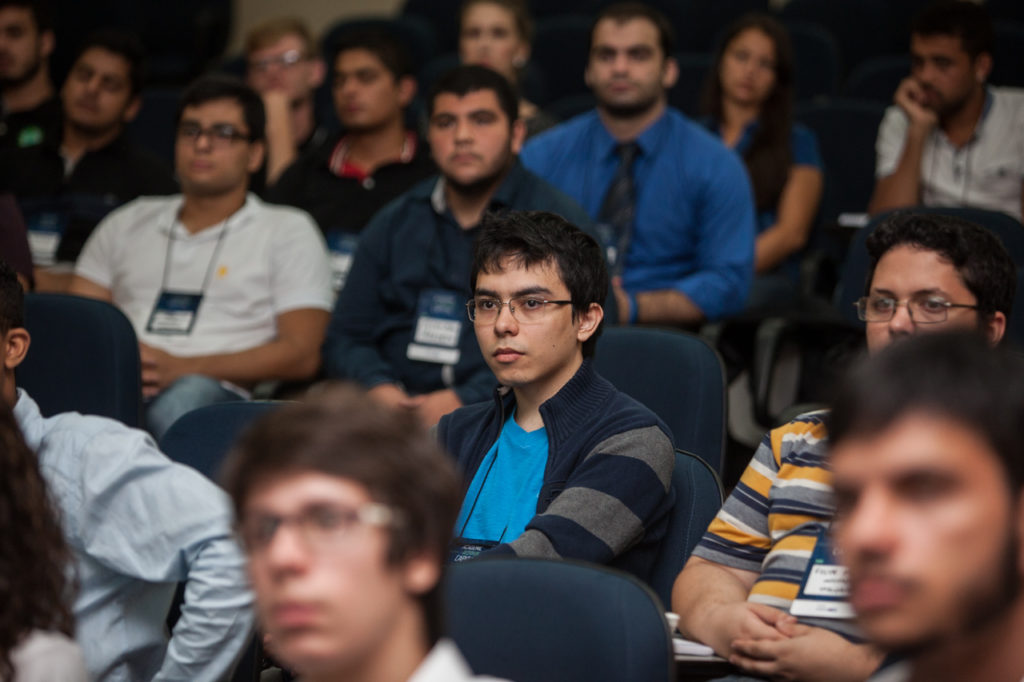 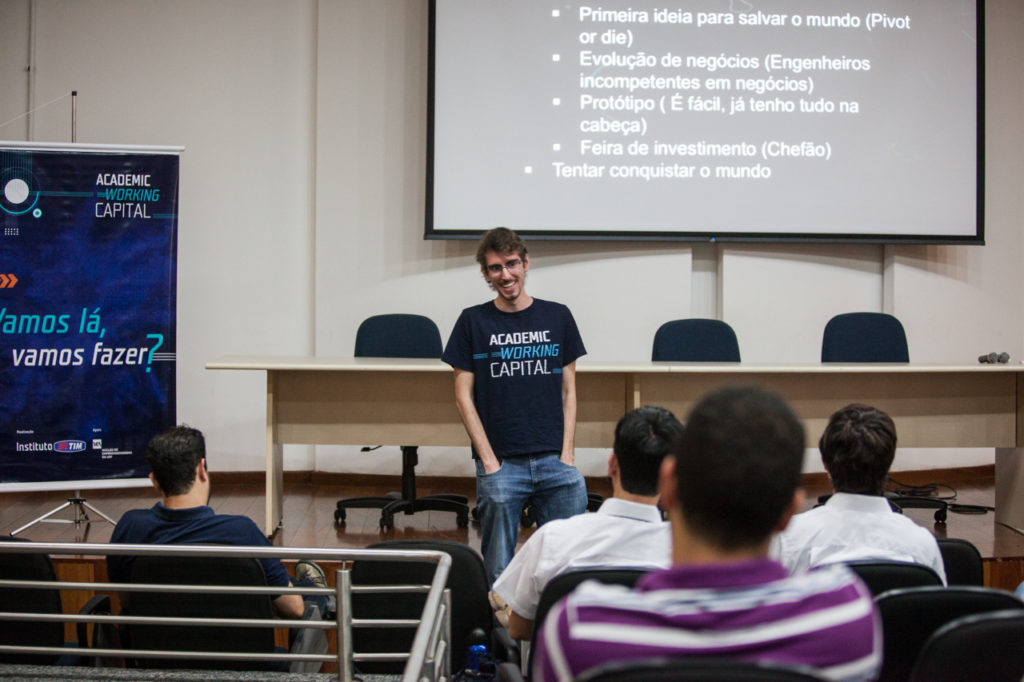 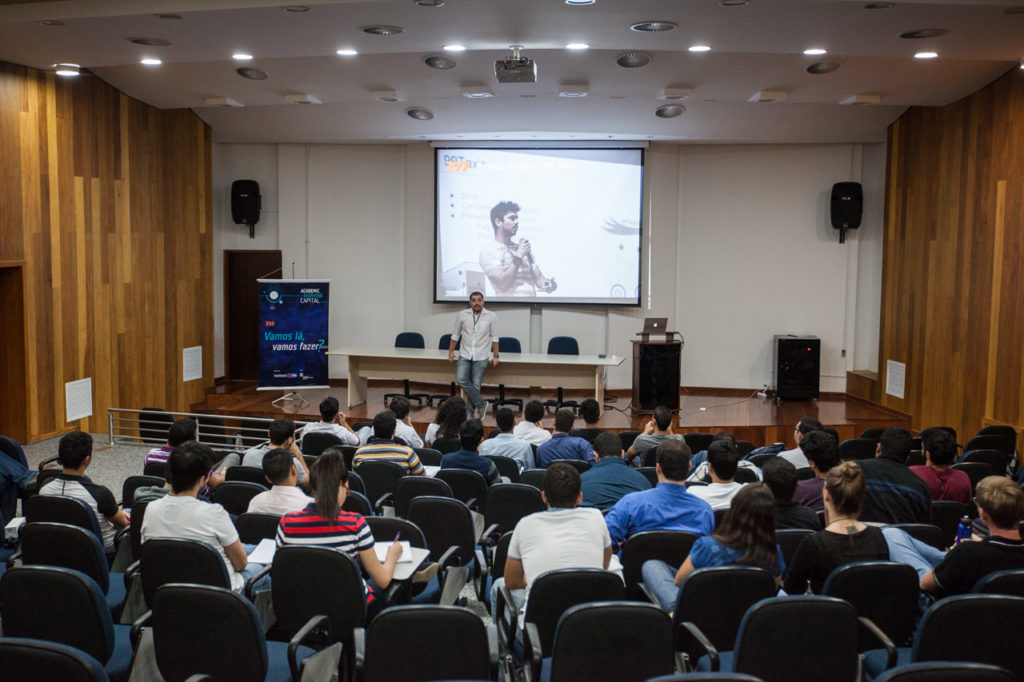 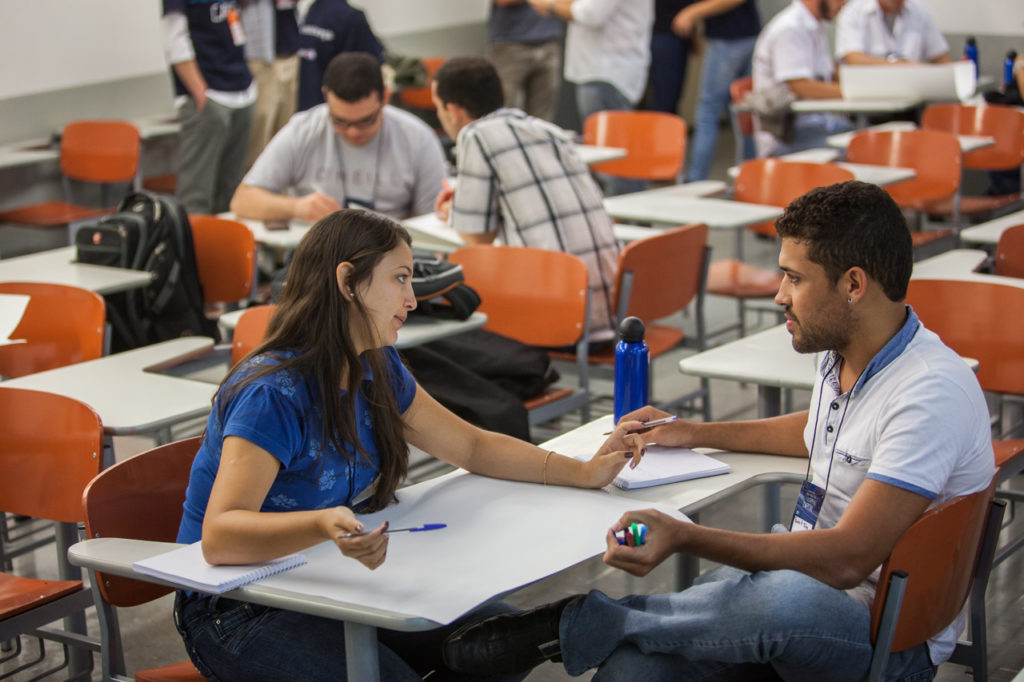 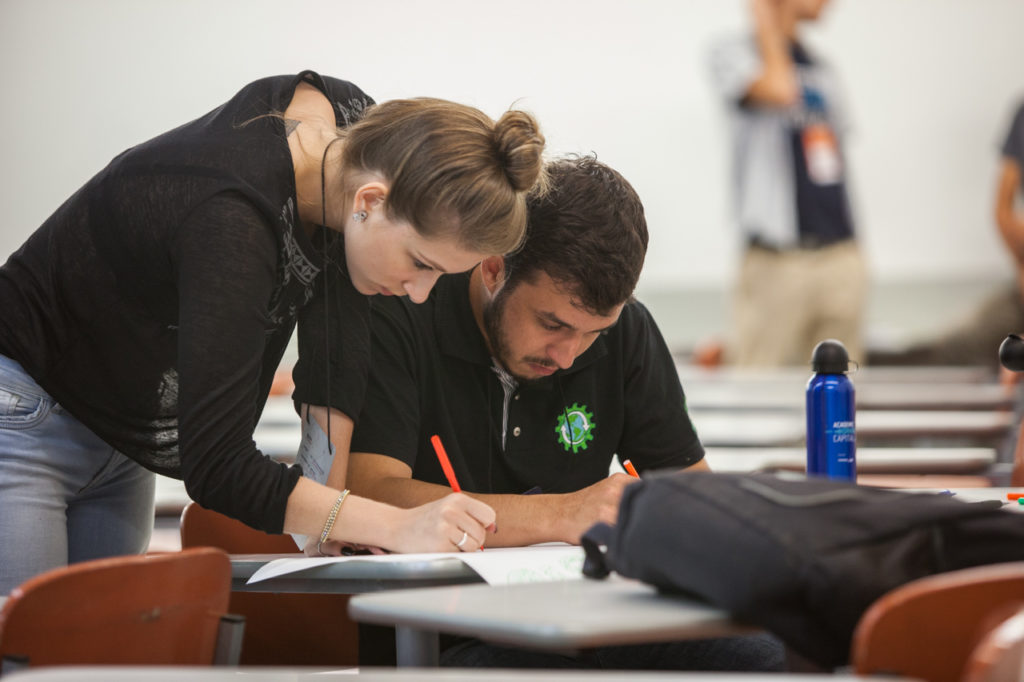 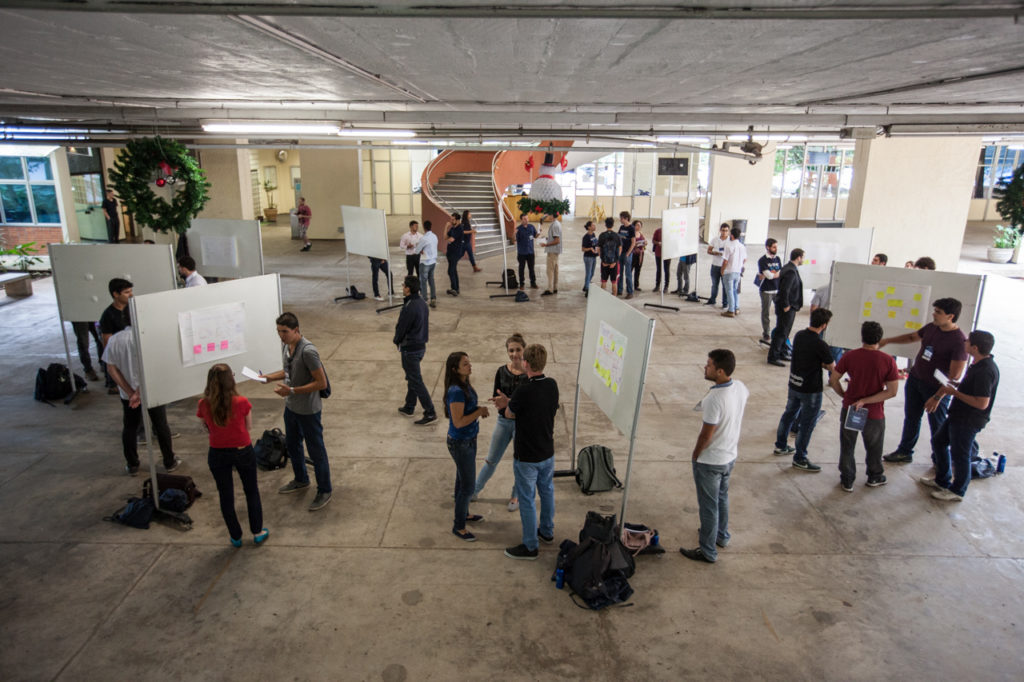 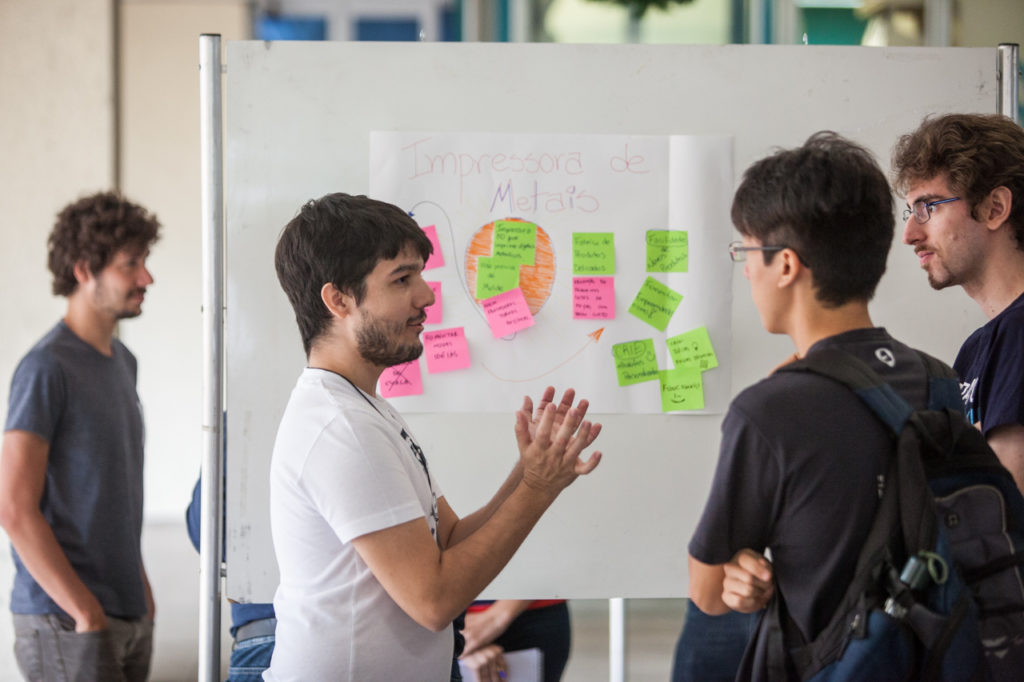 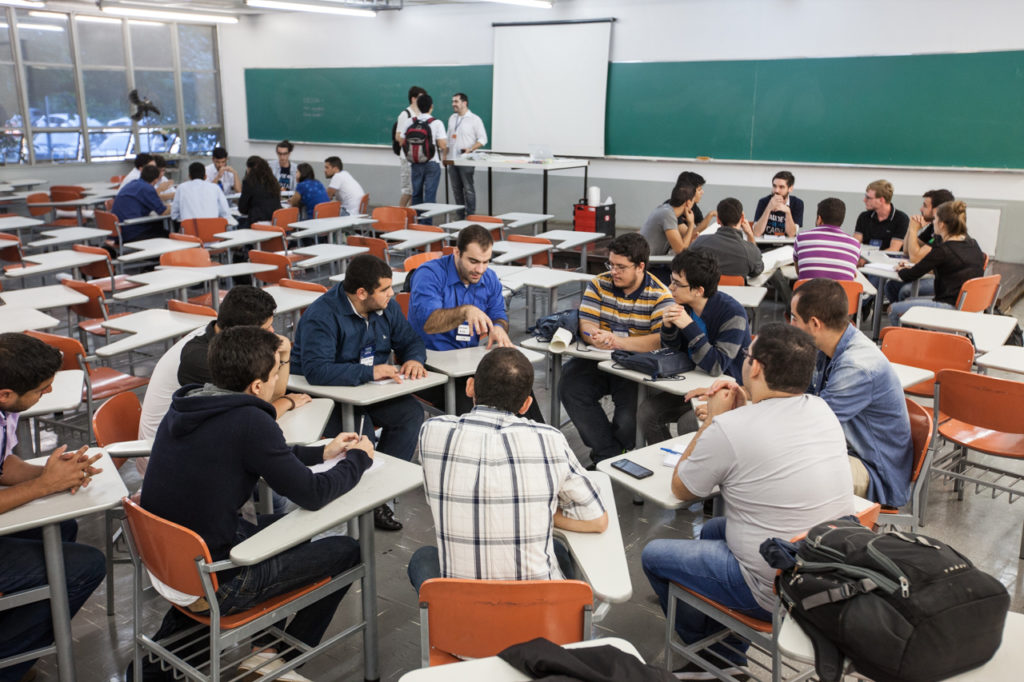 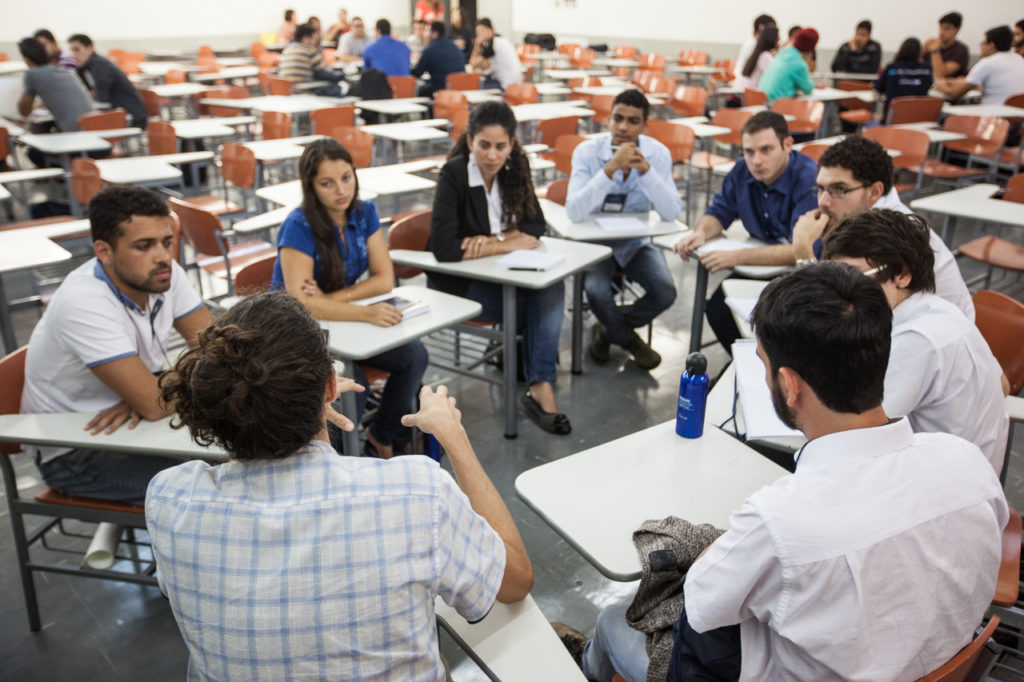