The open source software for cultural management and cooperative mapping Mapas Culturais is also available in app for Android. The app Mapas Culturais is fostered from information of platforms under operation − 6 states and 9 municipalities have already installed the tool − and makes information available on cultural agenda, events, places, and agents. The development of the app is one of the actions performed in partnership between Instituto TIM and the Ministry of Culture (MinC).

The app maps cultural information from several cities and states of Brazil. The user choses a city and the app connects to the map used by the local Department of Culture. If the city chosen does not use Mapas Culturais, it is possible to check Mapa da Cultura (Map of Culture), which has cultural events and places from several parts of the country.

The app code is open and it allows the creation of other apps from it. One example is Mapa nas Nuvens (Map on the Clouds), which was created in partnership among the Department of Culture from the Government of the Federal District, Instituto TIM and Observatório de Economia Criativa (Creative Economics Observatory) of Universidade de Brasília (UnB) (Brasília University) and has the same name of the platform Mapa nas Nuvens. Information of Mapa nas Nuvens was made available initially in the app of Mapas Culturais; subsequently, a proprietary app of Federal District was designed in partnership with the Minister of Culture.

In this app, the user finds cultural places and actions of the region. It is possible to collaborate and add places and actions, in addition to register individual and collective cultural agents. In 2017, Mapa das Nuvens might receive new features, such as subscriptions in public notes, workshops, festivals, and seminars. Furthermore, it will be carried out training to promote the use of the app.

Lívia Frazão de Castro, coordinator of Designing Public Politics of Culture for the Department of Culture of Federal District, highlights the importance of initiatives such as Mapas Culturais to promote culture and the design of public policies. “You start seeing the areas being stimulated the most, the ones receiving more resources and the ones receiving less, and then you start to design policies for areas with these absences”, she says.

In the state of Mato Grosso, Mapas MT was designed by Empresa Mato-Grossense de Tecnologia da Informação (MTI) from changes in the software Mapas Culturais. The app delivers information on cultural places, events, projects, and agents along the state. Every person can collaborate through the tool. “The advantage is to let the events more accessible. People do not have access to cultural programming as we would like”, states Araken Lotufo Ferraz de Oliveira, administrative analyst of Department of Culture from the state of Mato Grosso.

The management is from the Department of Culture, but other departments are already using the platform. In addition to the cultural area, the goal is that Mapas MT integrates all the departments to make information available to users on several subjects, such as sports, tourism, science and technology. 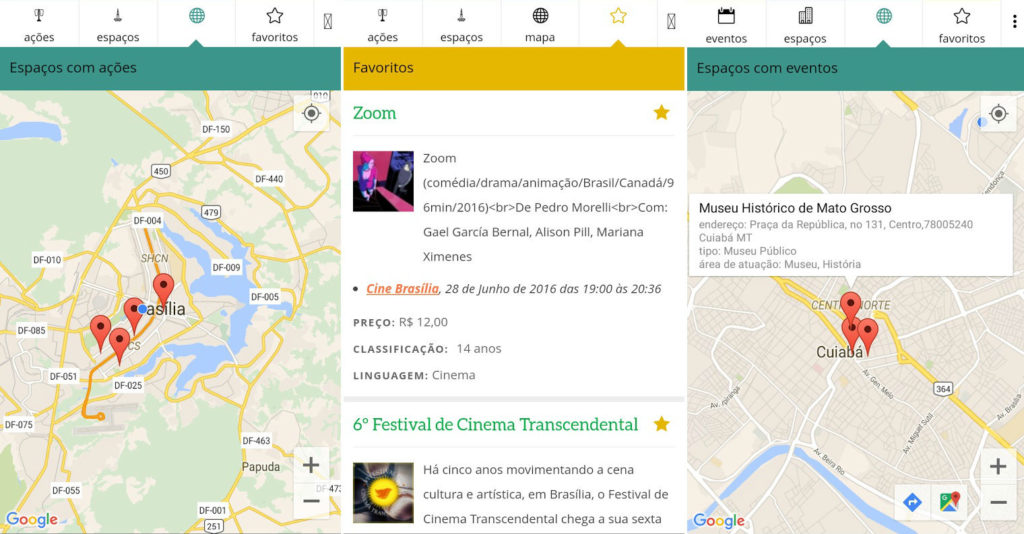